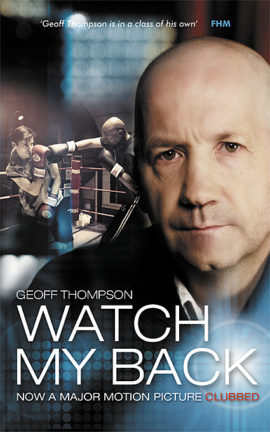 Watch My Back is the story of one man’s search for courage.

Depressed, bullied, intimidated by life and indoctrinated to believe that this was his lot, Geoff Thompson, on the verge of a breakdown, decided to fight back. In a bid to confront his fears, he took a job as a bouncer in one of Britain’s roughest nightclubs. Over the next ten years, he was involved in hundreds of brutal and bloody fights that left two of his friends murdered and many more in prison; he turned himself into a fearsome fighting machine. Geoff reached the top of his trade and became addicted to violence.

Then it all changed. After nearly being killed in a gang attack, and almost killing one of his attackers, he was forced to reassess his relationship with violence. After writing down his experiences, Geoff discovered a flair for writing. This is the story of an ordinary man who faced his fears and took himself from bedsit to best-seller but very nearly got killed on the way.

Geoff Thompson is the author of over thirty books, a stage play and a BAFTA-winning short film. His autobiography, Watch My Back, has been adapted into a major motion picture, Clubbed.