We’re delighted to give you a guest blog this week by one of our favourite authors, Steven Gauge. Steven’s fields of expertise include politics and rugby, so it’s fair to say he knows a lot about the rough and tumble, bloody-nosed pursuit of success and glory – and he also knows a lot about rugby… 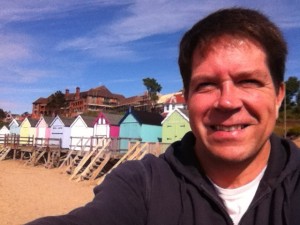 Steven Gauge and the picturesque beach huts of Felixstowe

Felixstowe not only has a major port and some very pretty beach huts, but it also has the Felixstowe Book Festival and I was delighted and honoured to be asked to speak at its Gala Dinner this weekend. The festival, now in its second year, was put together by Meg Reid, a dedicated bibliophile and professional business coach. Meg was driving back home with her daughter from the Cambridge Wordfest a couple of years ago and in a casual conversation came to the conclusion that Felixstowe would make a great place for a book festival too. A resourceful networker in her professional life, Meg started speaking to people about the idea and before she knew it she had 40 speakers lined up, a very elegant venue in the Orwell Hotel and a brand new cultural event on her hands.

A quick glance around the diners and I concluded that there were possibly a handful of fellow rugby players in the audience. Something about the club ties, broad shoulders and less-than-entirely-symmetrical noses gave the game away. However, Elaine Simpson-Long, the charming and prolific book blogger who had the job of introducing my talk, confessed that she knew next to nothing about rugby, being more of a cricket fan herself. I’m not sure she was any the wiser at the end of my evening but we did all have a bit of a laugh, mostly thanks to some one liners from You Know You’re a Rugby Fanatic When… and Political Wit along with a few of my favourite stories from My Life as a Hooker.

One of the great things about people like the festival founder Meg and volunteers like Elaine is how they make great things happen out of nothing more than a casual conversation on a car journey home. Like the tireless volunteers who keep rugby clubs going or indeed run and sustain any local clubs and societies, they help bring people together and create stronger, more vibrant communities. I had a completely delightful evening chatting to Elaine and some fellow festival speakers including Peter Wyton, the Polish poet Maria Jastrzębska and a senior and well-respected sporting journalist and author who I have a sneaking suspicion may have his eye on the prestigious Gala Dinner speaking slot at this marvellous event next year.